For the month of March, 2022, the Federation Accounts Allocation Committee shared a total sum of N725.57bn among the three tiers of government, as federal allocation.

This indicates a 23 percent increase from the N590bn that was shared by the three tiers of government in February.

The latest figure for March was contained in a communique issued at the end of the committee’s monthly meeting.

It was further disclosed that total revenue of N725.57bn, distributable for the current month, was drawn from Statutory Revenue of N521.16bn and Value Added Tax of N204.40bn.

From this stated amount, the Federal Government received N277.10bn, states received N227.2bn while the local government areas got N167.91bn.

The communique also stated that oil-producing states received N53.35bn as derivation or 13 percent  of mineral revenue.

It added that the cost of collection of VAT distributed for March was N8.78bn, while that of transfers/refunds/savings was N6.32bn.

Also, the cost of collection of statutory revenue distributed was N35.63bn while that of transfers/refunds/savings was N376.50bn.

FAAC had in February shared N590.546bn among the Federal Government, states and LGAs. 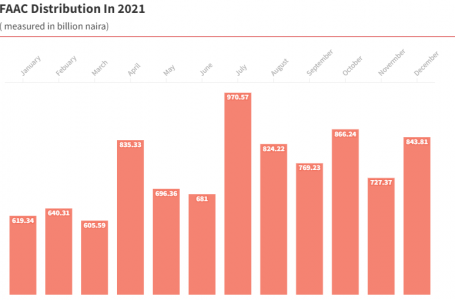