Sahara Reports claims a reliable source revealed that Nigerians in the UAE are now being targeted and arrested in multiple raids by the UAE Police. The sources claimed the arrests are particularly persistent in Abu Dhabi, the country’s capital.

According to another source, many of those arrested are innocent Nigerians who work legal jobs to make a living. Unfortunately, these “legal jobs” might now be illegal, following the recent suspension.

The Nigerian government have shown little or no promise to swiftly liaison with the UAE on the recent situation.

However, the Chairperson of Nigerians In Diaspora Commission, Abike Dabiri-Erewa, has asked that those who have been directly affected immediately report to the Nigerian mission in UAE to garner more information about the situation.

Arrest Of Nigerians In UAE

The UAE has reported several cases of violent attacks, fraudulent activities and robbery, all involving Nigerians.

Three Nigerians were arrested in different sting operations by the Dubai Police for suspected fraud after sharing lavish lifestyles on social media.

Prince Obieze Nestor, a Nigerian businessman was also arrested on Tuesday, January 12, 2021, by the police in Dubai for flaunting wads of money online. He reportedly died in police custody.

Four Nigerian women were arrested and arraigned at the Court of First Instance in Dubai on February 22, 2021, for luring a 33-year-old Indian man to a hoax massage parlour and robbing him of Rs 55,30,806.

On Monday, November 10, 2020, six Nigerians were handed a ten-year sentence by a Federal High Court in Abu Dhabi for funding the Boko Haram insurgency. The court judgement said that between 2015 and 2016, the accused transferred $782,000 from Dubai to Nigeria to benefit Boko Haram and terrorism.

Unfortunately, the innocent have also suffered for the sins of the guilty. In 2019, the Nigerian ambassador to the United Arab Emirates, Mohammed Rimi, disclosed that 446 were serving jail sentences in UAE. A figure that has moved higher as the years goes by.

There have been numerous reports that security operatives in UAE have been periodically raiding the homes of many African migrants, most of whom are Nigerians living in Al Qouz, Abu Hail, Sharjah, Al Barsha, Deira and other places December 9, 2020.

One of the Nigerian citizens who was arrested said “It was early morning time like 2am -5am, some masked individuals who called themselves CID burst into African accommodations and abducted all of them. They were taken straight to jail without any charges or trial. Several attempts to connect to the Nigerian Embassy and Consulate as usual failed.”

According to the victim, whose identity will not be disclosed for security reasons, “80 per cent of the persons arrested are legal resident while the rest 20 are those with either visit visa or having any visa related issues. I was in jail and I made several attempts to reach the embassy but without success. After a couple of days in jail, I finally got hold of the secretary of the Nigeria consulate who directed the call to a certain man and he promised the consulate would swing into action, till now they never did.”

If you were thinking the ban would affect Nigerians currently seeking employment visas in the UAE, you are very right.

When a type of entry permit is suspended for a particular country, it means that all nationals of the country suspended would not be granted a visa based on that entry type. Nigerians can no longer receive employment visas in the UAE until the ban is lifted.

On the other hand, it is not clear if the employment permits already issued to Nigerian citizens in the UAE would be withdrawn. 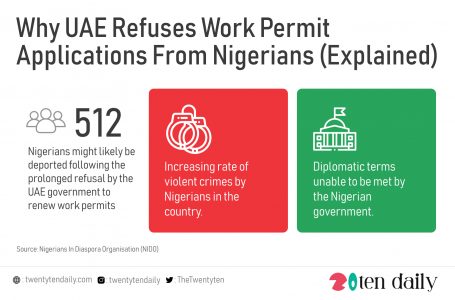