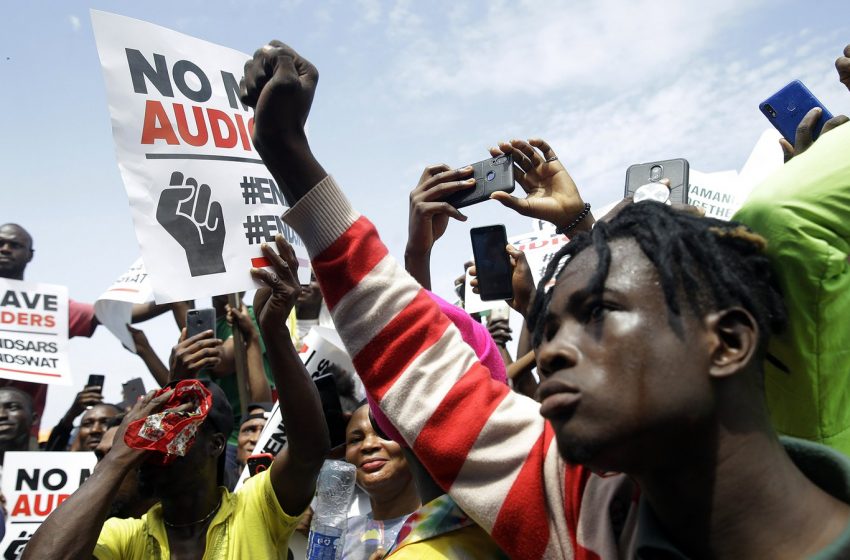 October 20, 2020, the announced date for the commencement of Operation Crocodile Smile, armed men of the Nigerian Army arrived at the Lekki Tollgate in Lagos, Nigeria and opened fire on peaceful and unarmed #EndSARS protesters, resulting in a disputed number of deaths.

When questioned, Nigeria’s recently retired Chief of Army Staff (COAS), Lt. Gen. Tukur Buratai, said the Nigerian Army abided by the rules of engagement on the night of the massacre after previously denying the army’s involvement despite multiple eyewitness accounts.

A judiciary panel was set up to investigate the killings, but external manipulation and disagreements between panel members stunted the panel’s progress.

The average Nigerian lives in fear of violent crimes by insurgents, kidnappers, armed robbers, the military and other security agencies in the country.

From reported day to day harassment to unlawful detention, the basic human rights of Nigerians are subject to threat under the barrel of the gun of its security forces.

Despite the promise to protect and defend, each government in Nigeria has allowed the military’s arbitrary and unrecorded killing, bullying of civilians, disregard for the legally mandated rules of engagement and zero tolerance for freedom of speech – a fundamental right as provided in the constitution.

October 16, 2021, 4 days before the first anniversary of the brutal crackdown on Endsars protesters in Lagos, Tunde Aminu* said he witnessed the harassment of a bus driver by some men dressed in the infamous military attire. The bus driver had taken a sharp left turn nearly skidding two soldiers off the road. He was flogged mercilessly by the officers as other passengers, including Tunde, watched on in fear.

Chidi Aloy*, a driver on a Hail Cab App also told TwentyTen that he had been arrested four times by members of the Nigerian police months after the EndSars protests.

According to Section 27 of the Nigerian Police Act, administrative bail is free, but Chidi narrated how police officers demanded N20,000 for the concocted crime of driving an internet fraudster. He was presented with a POS machine to make payment.

“They said they would charge me for aiding and abetting a criminal suspect and I would spend some time in prison if I didn’t pay them,” he said.

According to Amnesty International, almost every person arrested during the Endsars protests described being beaten with the butt of a gun, whips and fists during their arrests. The Committee to Protect Journalists (CPJ) added that at least 12 journalists were attacked during the #EndSARS protests by security forces and unidentified perpetrators.

One year later, no Nigerian security agency or government officeholder has claimed responsibility for the deaths of EndSars protesters on the said night. Worse, the end to police brutality which was the aim of the protest has still not been achieved.

The government may have successfully sold the idea of the disbandment of the SARS unit of the police force, but the scale of abuse by police officers, the military and other security agencies have only gotten worse.

Coping Mechanism and Its Peculiarity To The Nigerian People

Coping mechanism is a term used in psychology to describe the process of adapting to environmental stress that is based on conscious or unconscious choices and that enhances control over behaviour or gives mental comfort.

Today, a good majority of Nigerians have not learnt to fight the status quo, they have instead mastered the mechanism of coping.

An average Nigerian is pumped with the ability to manage hardship. A preferred solution is to never fight for a change but to find ways to survive even as the situation becomes worse. This leaves one to wonder if this coping process could be a facade to hide the fact that many are too afraid to ask for what they deserve or are too weak to speak for those who can try.

A report released by a research think-tank, Africa Polling Institute, on the #EndSARS protests, in 2020 revealed that six in 10 Nigerians (61%) expressed support for the EndSARS protests.

“A total of 1,114 completed interviews were captured in the poll out of 3,771 calls made, representing a response rate of approximately 30 percent. The sample consisted of 51 percent male and 49 percent female respondents, whose ages were 18 years and above,” the report read.

In October 2021, an opinion poll conducted by TwentyTen Daily showed that less than 40% still believed that protests of any kind could affect any real change.

John Adamu* a trader at a popular market in Lagos opined that more protests would only make the military, backed by the government crackdown harder on the people.

“The protests did not help last year. People like us with mouths to feed could not go out for fear of the army. Protesting would only infuriate the government and make things worse for us,” he said.

Adamu’s position may seem docile to the Soro Soke generation, but this position mirrors the opinions of many Nigerians who have mastered coping as opposed to taking a stand. Sad as the reality may seem, this position guarantees survival as proved by the unfortunate events of October 20, 2020.

*Names have been changed to protect contributor’s identity