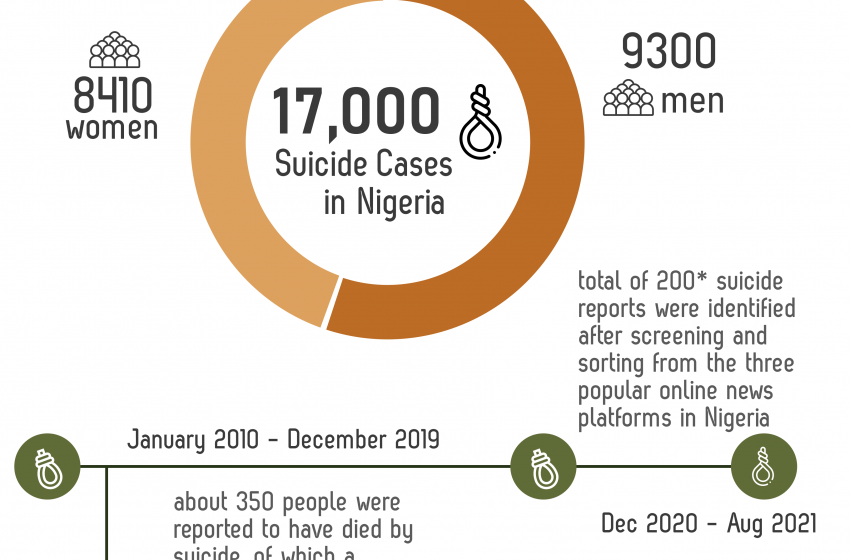 Taiwo’s decomposing corpse was found hanging from his rusty brown coloured ceiling fan in his one-bedroom apartment in Igando, a suburb in Lagos Nigeria. A short note was found two days later by his devasted younger sister.

“I am sorry but my country has failed me,” the note read.

One in every 100 deaths worldwide is the result of suicide. More than a handful of these deaths are recorded in Nigeria. Unfortunately, there is a dearth of research exploring the epidemiological aspects of suicide in Nigeria.

Taiwo is one of 200 reported cases of suicide in Nigeria between November 2020, and August 2021, according to daily online news reports gathered and reviewed by Twentyten Daily. This figure excludes numerous suicide cases that have not been reported by the media.

Suicide is an endemic scarcely reported or talked about by people in Nigeria due to the non-existence of a vital statistics system and how the topic is perceived in society. The dearth of data is also shrouded in stigma and cultural and religious sentiments associated with suicide in Nigeria. Deaths by suicide are often perceived as sinful, taboo and caused by evil forces, so the family are often stigmatised and denied social opportunities. Families of victims of suicide prefer to hide the mode of death, declaring suicides as accidental deaths or as homicides.

While suicide is still a crime in Nigeria according to section 327 of the country’s Criminal Code, many of the reported cases rely on police and hospital records, neither of which are comprehensive as they are often influenced by the bereaved.

What Do The Numbers Say?

A 2016 report by WHO titled, “Suicide in the World: Global Health Estimates,” showed that Nigeria has the highest suicidal rate among African countries in 2016 with over 17,000 suicide cases. According to the report, 9,300 victims were males and 8,410 were women.

Another report circumventing reported cases from January 2010 to December 2019 showed that about 350 people were reported to have died by suicide, of which a majority of the reported cases were male (80.6%).

For Twentyten Daily’s report, a total of 200* suicide reports were identified between December 2020 and August 2021 after screening and sorting from the three popular online news platforms in Nigeria (Instablog, Lindaikeji blog, Pulse).

Most of the suicide reports were found among those in the middle-income category and highest among students.

According to news reports, more men than women died by suicide between the time frame of our reports. This also tallies with a suicide report between 2010 and 2019.

In occupation, suicides were reported to be higher among students compared with other professions (χ2=18.188, p=0.006). An Instablog report dated November 25, 2020, shared that a 100 level university student was found dead in his room after dropping a cryptic message on his WhatsApp status.

“Often time I ask myself why do people commit suicide… Perhaps because they’ve got no one to encourage, motivation or guide them or because they felt there is no solution to whatever problem they are going through…” his message read.

Common Methods Of Suicide In Nigeria

Research evidence on suicidal behaviour in Nigeria documents the use of insecticide known as Sniper, hanging and self-cutting as methods of suicide. Several other methods arose as persons who engage in suicide are sometimes ambivalent and some are impulsive responses to psychological stressors. Factors attributed to suicide in Nigeria are personal risk factors including financial constraints, unemployment, prolonged undiagnosed depression, failure in school, family history of suicide, loss of loved ones and physical illness.

Suicide in Nigeria remains an understudied social issue and hopefully, more comprehensive studies can be conducted to reveal the actual consistent numbers associated with suicide in the country.

On the other hand, accurately portraying suicide rates is only a partial solution to a deeper problem. Research shows that poverty and inflation are leading causes of depression and by extension suicide in under-developed countries like Nigeria. Hopefully, a war against corruption would allow the likes of Tega to enjoy employment befitting a scholar and just maybe she would not be considered a statistic in suicide reporting in Nigeria

* Note that actual suicide numbers are more. The cases accounted in Twentyten Daily’s report are only reports made available through the aforementioned online news channels. 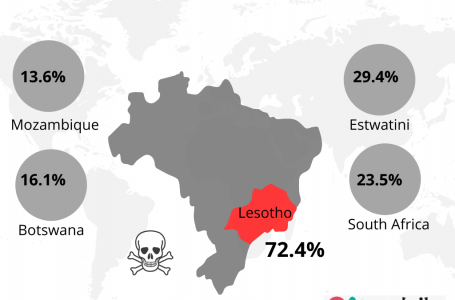